Thermoplastic (plastic, polymer) articles are produced with injection machines using the method of injection moulding. Plastic (in form of pellets) is loaded in hopper of injection moulding machine.The dosage amount of granules required for one injection, screw is captured and transferred to the material cylinder, externally heated by electrical elements. Moreover, plastic, at first, moves in continuous flow, but after that overflows torpedo and passes through annular space between cylinder and torpedo in thin layer. Because of this, it gets mixed very well and its temperature rises up to the temperature specified by technological mode.

Injection cycle begins in the moment when mould (pressform, form, stamp, die), is closing. First of all, moveable part of the mouldmove and touch stationary part of the mould. In this moment, screw under high pressure injects plastic in a mould, which is cooled with water. Since the temperature of mould is lower by 100—160 °С than temperature of molten material, it becomes cold quickly and hardens. In order to avoid shrinking of plastic as a result of quick cooling, screw hold pressure in a mould forsome time after injection. After that, it moves back and the next portion of plastic is passed to cylinder from hopper in the same order.

Plastic is cooled in a mould for some period of time.Waiting period is determined guiding by viscosity of molten material and wall thickness plastic product. After that, a mould is opened. After opening of mould, ejectors start working with the help of hydraulic cylinders of injection machine, and they push an article out of mould. 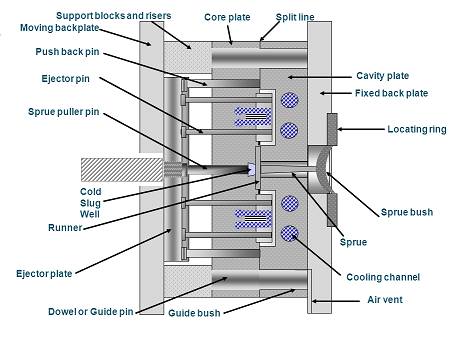 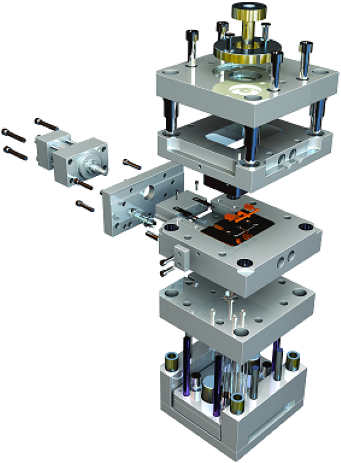